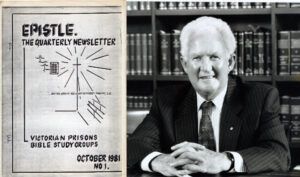 During his time in jail, Stan McCormack produced a magazine called “The Epistle”. Following his release, Stan continued to edit the magazine with a small group of volunteers, however he wanted to do more. With help from Judge Alastair Nicholson, Stan established The Epistle Centre in Napier Street Fitzroy, which provided a drop-in centre for newly released men and women, who needed support or advocacy in dealing with government departments, agencies, court matters and appearances.

In June 1984 the Epistle Centre was incorporated and a council consisting of a Supreme Court Justice, prison chaplains, a lecturer in legal studies, a social worker and representatives of the business community was formed to oversee the operation of the agency. 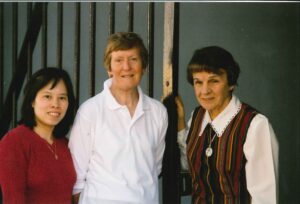 Impressed by Stan’s vision, Sr Clare McShee, a Franciscan Nun, established the Prison Outreach Support program. Sr Claire visited every prison in Victoria on a regular basis taking referrals and for many years was the only interface between the service and the prison system.

In 1987 the Epistle Centre received its first substantial government funding in the form of the Supported Accommodation Assistance program (SAAP) to set up a halfway house.

McCormack House opened by the Attorney General Jim Kennan as a 13-bed supported accommodation for people released from prison including clients with psychiatric and intellectual disabilities.

Funding also allowed employment of staff and the appointment of administrator Antony Calabrò, who later became the Executive Director. 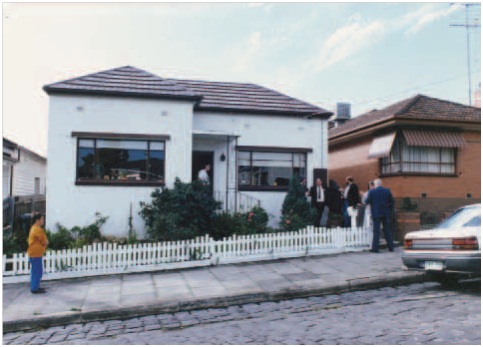 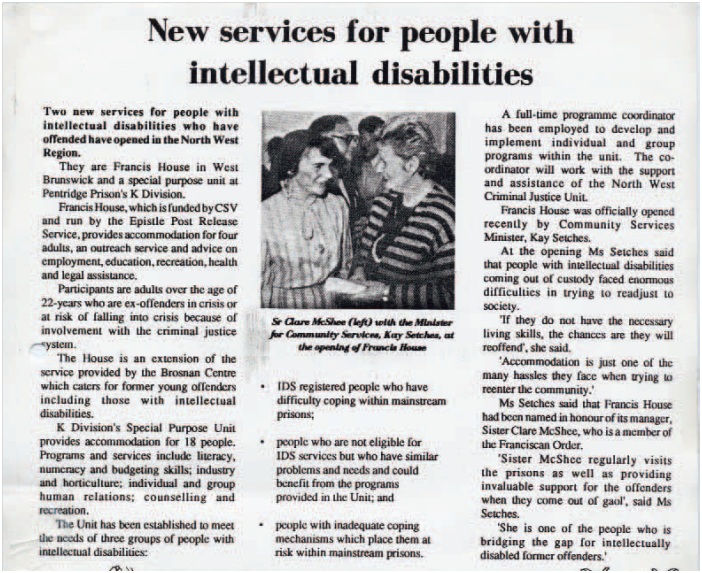 Justice Nicholson approached the Minister for Community Services, Peter Spyker, and the centre was given funding to set up a dedicated house for clients with an intellectual disability who had come into contact with the criminal justice system.

Funding from the Department of Health and Family Services and Disability Employment program was established. The program took referrals from the Disability and Mental Health programs. 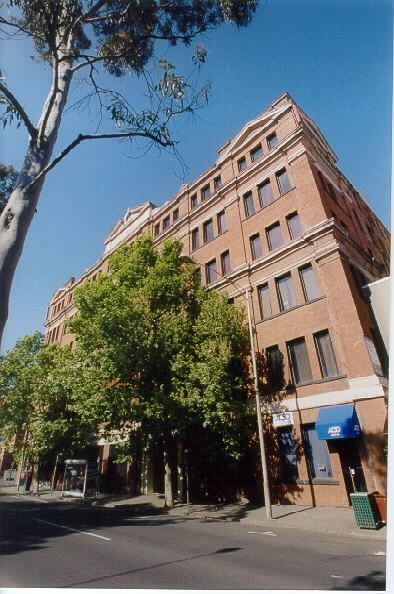 Due to increasing staff numbers and the closure of Pentridge Prison, a more central location was needed. Administration offices moved to Spencer Street with 15 employees and a growing budget of $1-1.2 million.

In 1996 we changed our name from the Epistle Centre to Victorian Offender Support Agency (VOSA) to more clearly reflect our activities and core client group.

As part of the reforms associated with the Victorian Premiers Drug Advisory Council (Pennington Review), COATS was established. The DHS informed us we were successful for the COATS tender because of our history in dealing with difficult people, our links to the judiciary and that we were seen as independent as we had never been involved or operated as a treatment agency.

Employment Directions was established through funding via the Federal Government Job Networks contracts.

A new program supporting people who had committed sex offences was also established and run by Sr Clare during this year.

The organisation changed its name to ACSO to recognise an extension of the service to disadvantaged people at risk of entering the criminal justice system. Federal funding also allowed for expansion of services to 15 sites across Victoria, New South Wales and Tasmania.

The Department of Justice funded ACSO to deliver three programs. The first was Bridging the Gap in 2001 which provided support for persons with major alcohol and drug issues and assessed as being at risk of self-harm or reoffending. Whilst a number of further disability residential houses were opened during the year, the highlight was Dual Disability House in the southern metropolitan region, funded by both Disability and Mental Health services.

After the success of ACSO’s first conference in 2001, ACSO officially launched its first Forensic Disability Conference in 2003. This provided an opportunity for national and international stakeholders, industry leaders and policy makers, to come together to discuss important issues within the criminal justice and social service sectors. 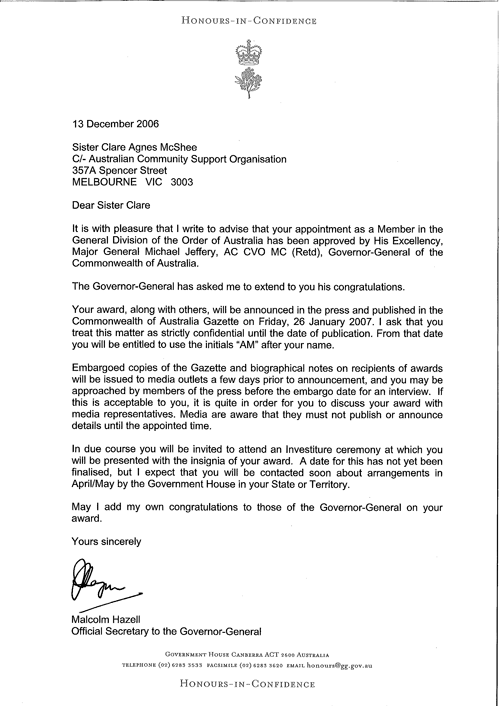 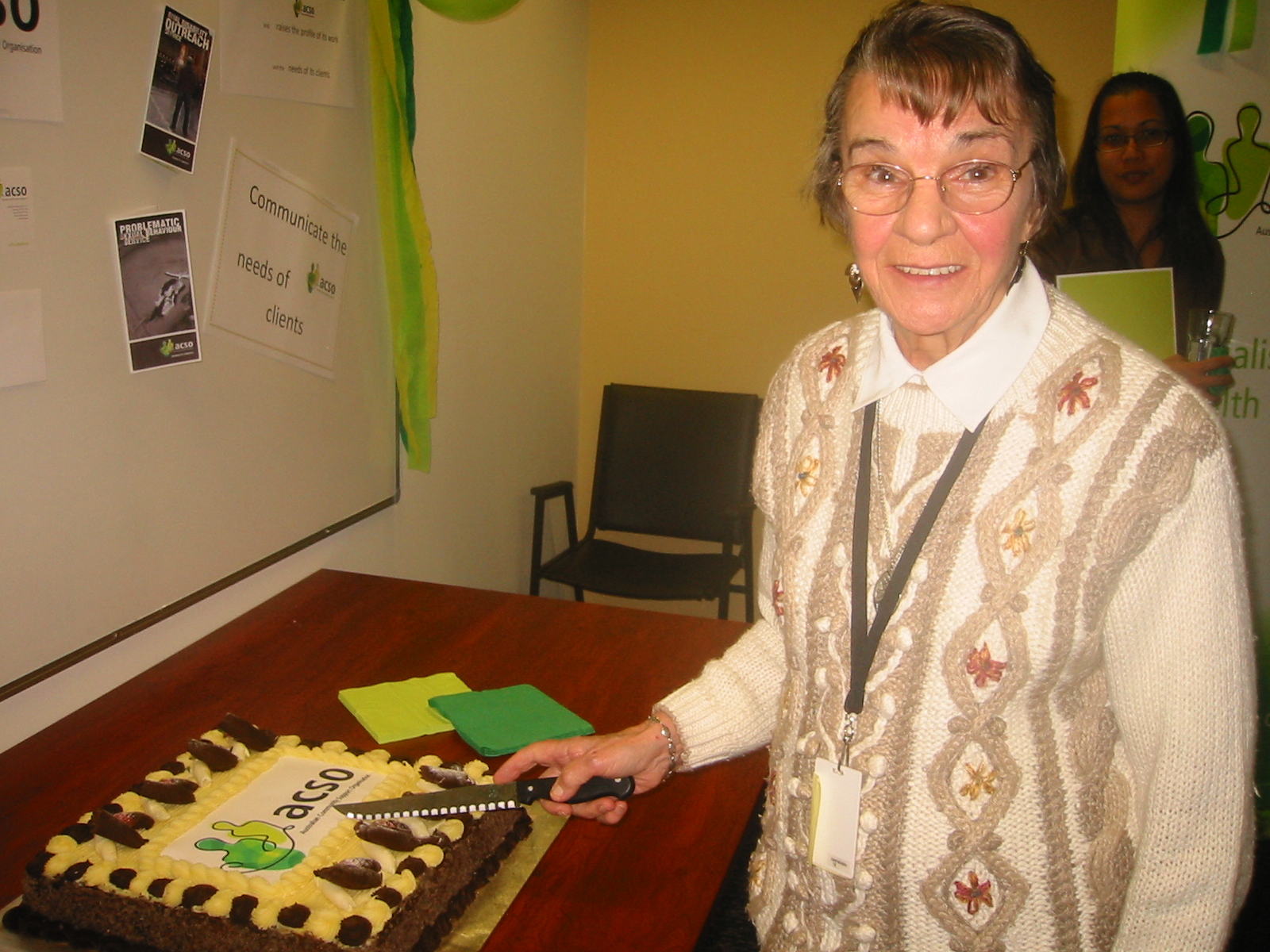 The move to Hoddle Street created ACSO’s first social enterprise Scanners R Us which engaged our Employment Program job seekers to convert over a quarter of a million paper files to an electronic format.

After many years of dedicated service, Sr Clare retires. 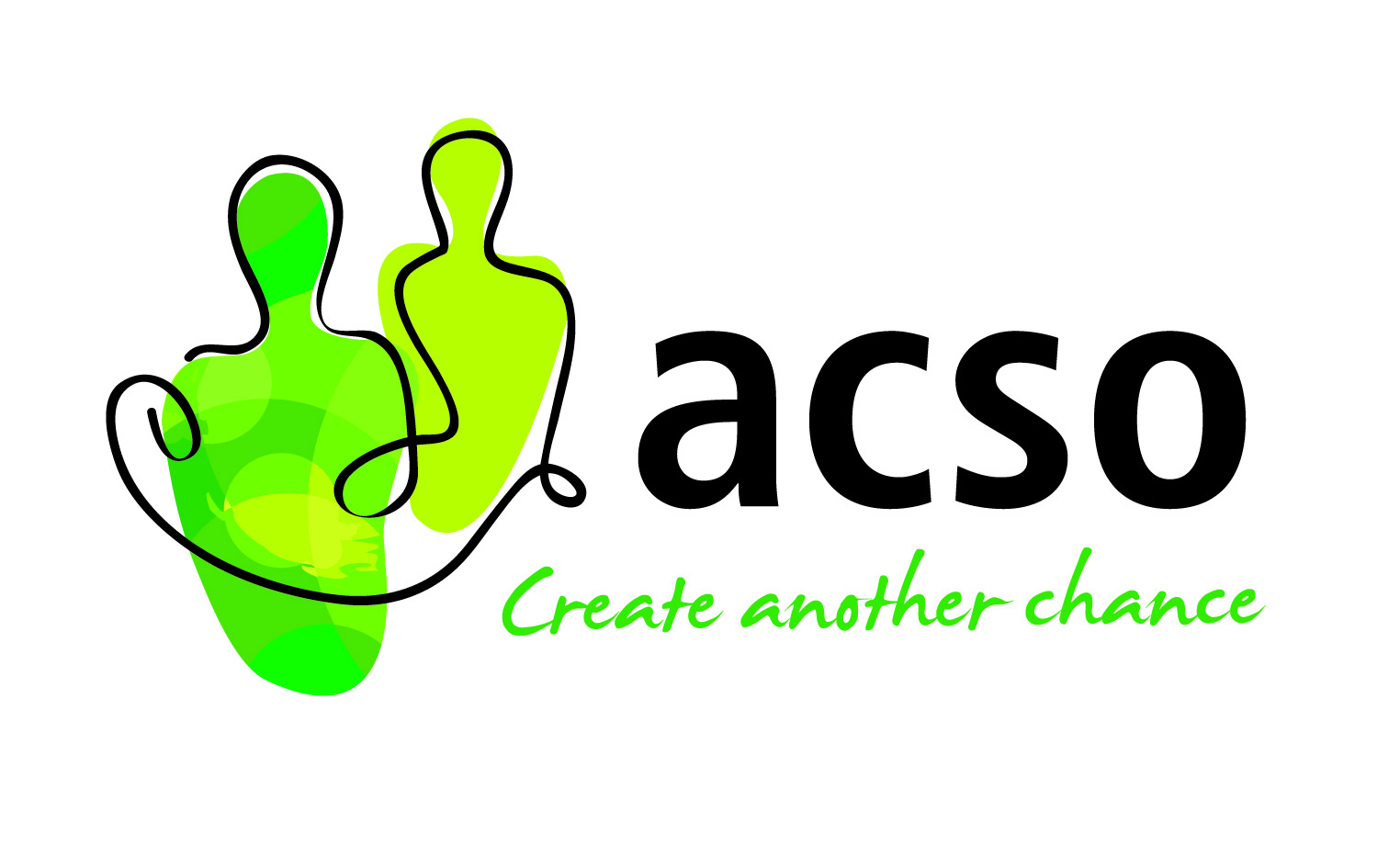 ACSO was selected as one of only two specialist homeless employment service providers in Victoria.

A new logo, along with a communications strategy, was developed to increase the profile of ACSO. 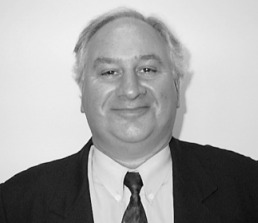 The Restore program, funded by the Lord Mayor’s Charitable Fund, offers tailored support services for families and carers of people with co-occurring mental illness and substance abuse issues who have had contact with the criminal justice system.

Three service streams were created with the new restructure: Housing Services, Community Based Complex Care Services and Clinical Services with the aim of providing a fully integrated and tight wrap around service for our clients.

‘Create Another Chance’ was introduced as our slogan and cemented as a work ethos.

RAPIDS provided an instant link between the courts and the AOD treatment sector for the highest risk forensic clients, while the new Life Skills program reduced the likelihood offending behaviour related to life skills deficit. ACSO also received funding from the DHS as part of the Supported Accommodation Innovation Fund to operate a new eight bed forensic disability house in 2013. Additional funding from the Federal Government’s Substance Misuse Service Delivery Grants Fund developed new pathways into mental health programs for offenders with a substance use problem who also presented with a mental health issue.

ACSO opened new hubs across regional Victoria to undertake non-forensic intake services for AOD and community mental health, along with the Youth Residential Rehabilitation (YRR) service in Bendigo. ACspresSO, a social enterprise to train people for the hospitality industry, was founded and opened to the public next to ACSO’s head office in Richmond.

Through a merger with Access Community Group, ACSO expands its services to employment and training of young people into the Illawarra region of NSW. ACSO also launches On TRACC, Australia’s first social impact investment addressing recidivism in partnership with ARBIAS and wins the CREST contract for services in Queensland.

In order to provide a more meaningful client experience and reduce stress on clients in recording their personal histories, the client management system OSCA is introduced.

The Atrium program was launched in partnership with Caraniche and Melbourne City Mission, responding to challenges with increasing remand rates and housing availability across metropolitan Melbourne. This year, ACSO also partners with Forensicare to deliver specialist AOD services to forensic patients at Thomas Embling Hospital.

A new logo is launched as part of a major rebrand and strategic marketing plan.

While I was in an assistant prison chaplain said to me “Stan, I want you to give some thought to what would be needed when men are coming out of jail, like a half-way house.  I have a couple of barrister friends who have noticed firsthand the lack of support of anyone after release.” This was late 1982.

So, I set to work and thought hard, and I decided to make an exercise of it. I wrote out everything that someone may need, a site for the house, food, clothing and access to resources generally. 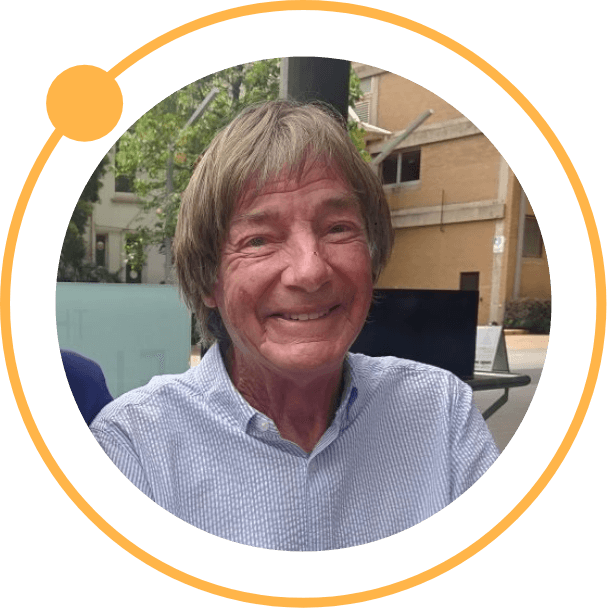 The concept of the first house in Napier St, Fitzroy, house, a double story terrace was to provide accommodation upstairs, and downstairs, a base for the production of the Epistle Magazine and a ‘drop-in’ facility for newly released men and women, who were in crisis, needed support or advocacy regarding dealing with government departments, agencies, or Court matters and appearances.

From that time people just kept coming in, and I had an unpaid but qualified social worker as a helper.​ At one point it was so crowded, I had partitions erected to divide my bedroom into sleeping quarters for 3 people! When the house was full, we used to accommodate guys in boarding houses across inner Melbourne. ​

The more men we took in, the more support we seemed to get from different people and agencies. Eventually we were able to purchase the house.

miracles seemed to happen all the time

We never had the money when the time came to pay the rent, but we always got it somehow in the nick of time, often given as a surprise gift, and sometimes to the cent, it felt as if we had divine protection!​

​We realised we needed to get a committee of management established, so it was a case getting hold of strategic people.  Someone suggested we get Judge Alastair Nicholson, who was then head of the Parole Board. He committed and was our chairman until his retirement in 2010.

From our early days, ACSO has grown more than I could imagine. I think I would have done better if I had paced myself but if I had stopped and thought about it wouldn’t have been spontaneous and evolved the way that it did. 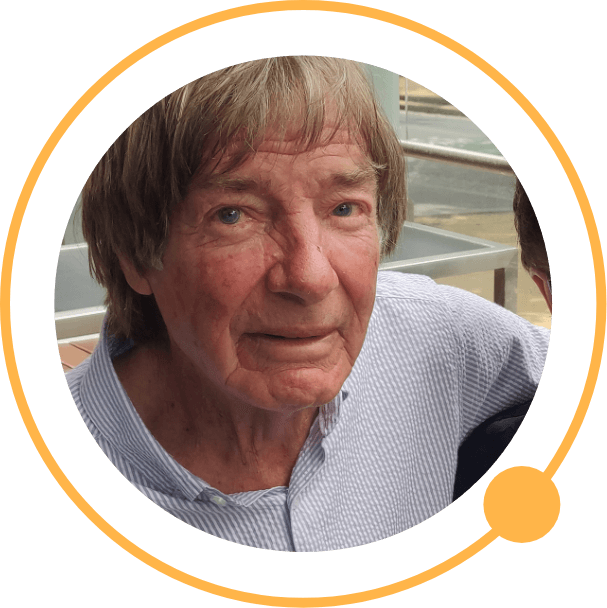